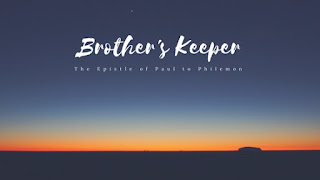 A trustworthy person is a reliable person. It is commonly said that trust is built or developed over time. Trust is earned through a series of exchanges and occurrences of character traits exhibited by a person. When we trust God, we are simply saying that in the absence of any trace of Him, when the occurrences around us do not seem to reflect Him, we can depend and trust in His never changing character over time. Amen!

The Epistle of Paul to Philemon communicates an aspect of trust between Paul and Philemon. After encouraging Philemon to receive Onesimus no longer as a slave but as a brother in the Lord, Paul further tells Philemon to credit His account on anything that Onesimus owes him. Then he says

Philemon 1:21 (NKJV)
Having confidence in your obedience, I write to you, knowing that you will do even more than I say.
Emphasis Mine

I call that a statement of trust – having confidence in your obedience. In the absence of Philemon’s presence, Paul could still rely on his character. This is what I call a true brother’s keeper relationship. He trusted and could count on his character.

Now, examine yourself as you improve on becoming an outstanding brother’s keeper. Has your character overtime been that which has built trust between you and your fellow brethren in the Lord? If not, all hope is not lost. Carefully and intentionally work on yourself so that you offer nothing but the best of you in your relationships.
- December 10, 2017
Email ThisBlogThis!Share to TwitterShare to FacebookShare to Pinterest