Walk With The Wise 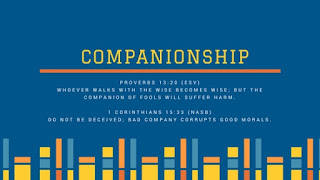 Proverbs 13:20 (ESV)
Whoever walks with the wise becomes wise,
but the companion of fools will suffer harm.

Proverbs 13:20 (AMP)
He who walks [as a companion] with wise men will be wise,
But the companions of [conceited, dull-witted] fools [are fools themselves and] will experience harm.

Let’s establish this together. According to scripture, a fool is someone who says in their heart, there is no God (Psalms 14:1).

The scripture communicates many things;

·       Power of Influence
-Note that it says when you walk with the wise, you become “wise”, not “wiser”. By implication, prior to keeping company with the wise, you were unwise. Your choice of a wise companion is so powerful such that it changes your level.
-When it comes to changing levels from being wise to wiser, you need instruction.

Provers 9:9 (NLT)
Instruct the wise, and they will be even wiser. Teach the righteous, and they will learn even more.
-It will profit you to walk with the wise. Amen!

·       Power of Impartiality
-The scripture says “whoever”; it is not for a select few.
-Meaning, we have equal opportunities. So we cannot base the outcome of our lives to chance, but rather to our choices.
-Choose correctly.
- April 08, 2018 No comments:
Email ThisBlogThis!Share to TwitterShare to FacebookShare to Pinterest

·       We ought to get to a place whereby we settle it within us that companionship is seasonal and godly. Seasonal because, changes will be experienced that will require adjustments, new skills, new approaches, etc. Godly because, it is relationship based and "relationship" is God’s idea and design and in order for us to succeed, we ought to be spirit led even in our companionship relationships. Amen!

Previously, we had examined the separation of John Mark from Paul and Barnabas. And later, the separation of Paul and Barnabas. When we get to a place where we live in the reality that companionships are seasonal and godly as we have seen in scriptures many times, we will keep a godly attitude even as we move on knowing that for as long as seasons remain, the Lord might cause our paths to meet again for a different assignment. Paul, Barnabas, and John Mark worked together during a missionary journey and were later separated.

Then came another season whereby Paul and John Mark had to work together. We know this because Paul refers to John Mark as his coworker in his epistle to Philemon as recorded in Philemon 1:24.
This same John Mark is also referred to as a helpful person by Paul in 2 Timothy 4:11(NIV). Paul, speaking to Timothy his son in the Lord says, “Only Luke is with me. Get Mark and bring him with you, because he is helpful to me in my ministry (2 Timothy 4:11 NIV).

In conclusion, we will say this, as you get wiser in your companionship relationships, carefully make decisions. Always remember the following;

- do not discredit a person just because you do not get along with the person during a particular season. Paul did not discredit Barnabas neither did Barnabas discredit Paul.
- disapprove of the character or behavior that the person portrays which is not godly, however, do your best to not get into disagreements with the person. When John Mark deserted Paul and Barnabas, Paul referring to that incident said to Barnabas, he did not think it wise to go on a trip to visit the believers with John Mark. Paul disapproved of John Mark’s character yet, he did not get into any disagreements with John Mark.
- do not compromise your values and standards just to accommodate mediocrity from another person. Paul was not going to stoop for disloyalty, lack of integrity and lack of purpose and focus from any source. Paul had values and standards and he stood for what he believed despite the odds.
- accept the fact that you might and will be misunderstood for maintaining very exceptional standards and an excellent spirit, however, keep praying for others so that their eyes might open up to the reality of how to do relationships better. Amen!
- the people who show sign of immaturity today may later grow up to have exceptional values and do exploits in the kingdom. John Mark is the author of the book of Mark (New Testament). Amen!