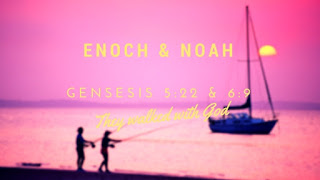 It is equally important to start strong and finish strong. Enoch and Noah had an incredible start – walking with God. The bible says of Enoch…

Genesis 5:24 (NKJV)
And Enoch walked with God; and he was not, for God took him.
Emphasis Mine

Genesis 9:20-25 (NIV)
Noah, a man of the soil, proceeded to plant a vineyard.  When he drank some of its wine, he became drunk and lay uncovered inside his tent.  Ham, the father of Canaan, saw his father naked and told his two brothers outside.  But Shem and Japheth took a garment and laid it across their shoulders; then they walked in backward and covered their father’s naked body. Their faces were turned the other way so that they would not see their father naked.
When Noah awoke from his wine and found out what his youngest son had done to him, he said,
“Cursed be Canaan!
The lowest of slaves
will he be to his brothers.”

As we can see from the verses above, the journey of each man continued and took different turns. Our walk with God is a test of consistence and persistence. We need to walk conscious of a victor’s mentality knowing that indeed it will get challenging, however, we will finish strong, no matter what.

How would you want your entire story told? Would your story be that of one who started strong and finished strong? Examine your walk with the Father and begin making the necessary changes such that you have an outstanding story.
- November 19, 2017
Email ThisBlogThis!Share to TwitterShare to FacebookShare to Pinterest