Apostle Paul’s Encounter With The Lord 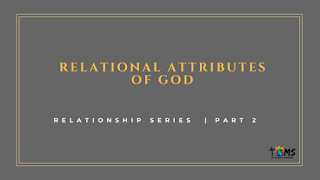 When we began this series, one thing we did mention was that it is not very feasible to talk about all the relational attributes of the Father within a short period of time. However, as we attempt to stir you in the right direction when it comes to His relational attributes, there are so many aspects of Him that you will come to discover in your relationship with Him that will highlight an aspect of Him that you may not have known. Summarily, you will get to know Him not only through what you have been told but through your experiences with Him. Amen.

Previously, we talked about the importance of having a relationship with Jesus by making Him Lord of your life because when you do, you begin enjoying a deeper and intimate relationship with the Father. Discovering Him better through your relationship with His Son. Amen.
So, let’s continue this series by examining how He related to men and women in the Bible through His son. And also examine the aspects of His relational attribute that stood out in their relationship.

We will begin by looking at Saul who was later named Paul. His first encounter with Jesus is recorded in Acts 9:1-9. I will read for you Acts 9:3-5 (NKJV)
As he journeyed he came near Damascus, and suddenly a light shone around him from heaven.  Then he fell to the ground, and heard a voice saying to him, “Saul, Saul, why are you persecuting Me?” And he said, “Who are You, Lord?” Then the Lord said, “I am Jesus, whom you are persecuting. It is hard for you to kick against the goads.”

For anyone who knows the details of this story well, you will agree with me that it was indeed a life-transforming encounter for Saul. So transforming that even His name changed. So, the question is this, what are some of the relational attributes of the Lord seen in this encounter.

1)     We see the mercy of the Lord being demonstrated herein that the Lord had every reason to punish Saul for threatening and murdering the Christians. As a matter of fact, Saul was on a mission to threaten and murder more Christians when He had an encounter with the Lord. Yet, the Lord was merciful to Saul; it was in the power of the Lord to punish Saul for what he was about to do and the many bad things he had done but the Lord did not do so. Rather, He was merciful. Amen.
2)     We see the patience of the Lord also demonstrated as He answered every question asked by Saul. In verse 5 Saul asked, “Who are you, Lord?” In verse 6 Saul asked, “What do you want me to do?”
3)     We see that the Lord is a restorer. The Lord told Him to Arise and go into the city and he will be told what to do. As the story goes, Paul’s restoration began and today we are beneficiaries of the great work He did. Amen.

- April 14, 2019
Email ThisBlogThis!Share to TwitterShare to FacebookShare to Pinterest