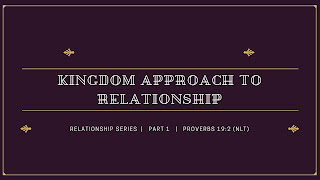 ·       The goal of this series is to enable and help us see ourselves as relationship beings according to God’s original design. Also to rediscover, understand ourselves and our place in the context of relationship through the lens of Christ. Our heavenly Father loves relationships (association between persons) and when He created man, he intended to have relationship with man. We will look at a few verses together that confirms this statement. Genesis 1:26-27 is one of such scriptures and it says;

Then God said, “Let Us make man in Our image, according to Our likeness; let them have dominion over the fish of the sea, over the birds of the air, and over the cattle, over all the earth and over every creeping thing that creeps on the earth.”  So God created man in His own image; in the image of God He created him; male and female He created them.

While so much can be said about these verses, I want us to see that, first, a desire to look like the person you are in relationship with, is a God-given desire. Secondly, a desire for relationship triggered the creation of mankind. Amen.

Genesis 3:8 (NKJV)
And they heard the sound of the Lord God walking in the garden in the cool of the day, and Adam and his wife hid themselves from the presence of the Lord God among the trees of the garden.
Our Father’s desire to relate is so palpable, such that even in man’s fallen state, the Father Himself demonstrates a desire for relationship.

Leviticus 26:12 (NKJV)
I will walk among you and be your God, and you shall be My people.
Another scripture illustrating the Father’s unique desire to be amongst His people.

·       Another truth we must not overlook when it comes to relationship is that Man was designed to have relationships; first with God, then other humans.

In terms of positioning, in this scripture, we see that God comes first, then man.

Genesis 2:18 (NKJV)
And the Lord God said, “It is not good that man should be alone; I will make him a helper comparable to him.”

Initially, when God created man, He related and fellowshipped very closely with Man. Later, God himself saw the need for man to not only relate with Him but also with other humans. Then God provided a helper comparable to Him. Amen!

The two main points we will like for you to go with today, are these;
-First, our heavenly Father loves relationship and when He created man, He intended to relate with Man.
-Secondly, Man has been designed to have relationships; first with God, then other humans. Amen!

- November 25, 2018
Email ThisBlogThis!Share to TwitterShare to FacebookShare to Pinterest