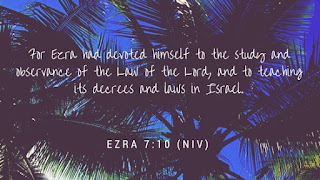 Are you a leader of leaders? A leader of leaders is a wise and confident person who guides the people he leads and who encourages the people around him to build up themselves for leadership roles. He is also one who takes full ownership of his responsibilities. Leadership void of the fear of the Lord is of no value.

As a way of standing out, Ezra appointed other leaders as authorized by the king and when the situation arose. King Artaxerxes trusted Ezra to appoint magistrates and judges to administer justice to the people in the Trans-Euphrates- all who knew the Law of the Lord. And for those who did not know, the King authorized Ezra to teach them. Ezra 7:25.

When Ezra saw the need to appoint leaders, he did. An example is seen in Ezra 8:15-16. He separated himself unto God by being faithful to his assigned duties (not getting involved in detestable practices) as a leader even when others did not.


Ezra 9:1 (NIV)
After these things had been done, the leaders came to me and said, “The people of Israel, including the priests and the Levites, have not kept themselves separate from the neighboring peoples with their detestable practices, like those of the Canaanites, Hittites, Perizzites, Jebusites, Ammonites, Moabites, Egyptians and Amorites.
Emphasis Mine

Ezra chose to separate himself unto to the Lord and as a result, he was the “go to leader” in his own community (environment). He did not give room to any form of compromise.

At the slightest observance/notification of sin, Ezra was confident enough to address it, not hesitant.
The leaders and officials he was leading obviously needed guidance in the path of faithfulness. The Word of God in you is your guarantee to be outstanding as a male.
In order to be outstanding, you need to address arising situations head-on and not shy away from them?

Ezra 9:2 (NIV)
They have taken some of their daughters as wives for themselves and their sons, and have mingled the holy race with the peoples around them. And the leaders and officials have led the way in this unfaithfulness.”
Emphasis Mine

Ezra intervened when trouble arose. He did not give room to any blame games, accusations, rather, he was solution oriented.

Ezra 1:3 (NIV)
When I heard this, I tore my tunic and cloak, pulled hair from my head and beard and sat down appalled.
Emphasis Mine

Ezra 1:4b (NIV)
And I sat there appalled until the evening sacrifice.
Emphasis Mine

Do you shy away from the issues that arise around you or do you boldly confront or intervene by providing possible solutions?
Are you a male by God’s design? Choose to standout on purpose. Distinguish yourself. Separate yourself unto the Lord, embrace your duties and responsibilities fully.
The goal of effective leadership is to train others to lead. Most often, you teach others how to be outstanding in leadership by being a physical example. For this to be fulfilled, you must purpose in your heart to be outstanding, not mediocre. Amen!

- November 12, 2017
Email ThisBlogThis!Share to TwitterShare to FacebookShare to Pinterest