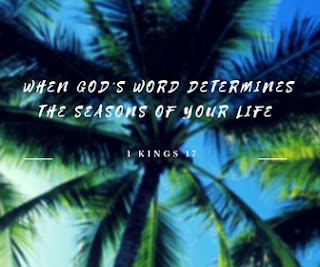 In summary, we have seen some benefits when we allow God’s word to determine the seasons of our lives. In this series, we have seen that directions, supernatural provisions, satisfaction, protection, service, influence, accommodation are guaranteed when God’s word determines the seasons of our lives. We have also seen that God is glorified, we become a source of encouragement to others and our expectations and outcomes become clear.
Some of the requirements in order to be successful, include Love, Faith, Obedience, Understanding, and Vigilance. And lastly, we will not be discouraged because our challenges become stepping stones, we will encounter many aspects of His character in the process and we will function with confidence. And we will always remember that his word to us is very unique to us. Amen.

Therefore, Father, we say thank you for teaching us this season about the importance of your word in our lives using 1 Kings 17. I decree and declare that from this day forward your word to us is the final check before we proceed in any direction in life. We say “No” to confusion, “No” to stagnation, “No” to distractions, “No” to human opinions and “No” to being a non-entity in society.
Your word has been tested and proven to bring forth results therefore on the foundation of this truth about your word, we will guard every word received from you and implement it unaltered, protect it as we await the day and season of manifestation.
I decree and declare that your mind, your will and emotions will not get in the way when I receive the word from the Lord for me. I choose to surrender the directions of my life to you.
We receive grace, strength, wisdom, knowledge and understanding as we proceed.
We choose to allow your word to be the transforming tool of our lives.
As a way of expressing our agreement with you concerning your word to us, we will be prompt to obey at all levels.


Thank you Father. In Jesus Name we have prayed. Amen.
- September 09, 2018 No comments:
Email ThisBlogThis!Share to TwitterShare to FacebookShare to Pinterest

You Will Be Entrusted With More Responsibilities


Here is our emphasis. Can the Lord trust you? A word from the Lord through you to another is dependent on your submission and obedience to Him. This was clearly seen in Elijah’s life.
- September 09, 2018 No comments:
Email ThisBlogThis!Share to TwitterShare to FacebookShare to Pinterest

It Is Unique To You

When you receive a word from the Lord about a situation, your best bet is to gain clarity from him and proceed by implementing. Some of the temptations that we may encounter in situations like this may include doubt, confusion, and comparison. When you interact with other sons and daughters of God, always remember that your relationship with the Father is very personal. Although you all may have a similar issue, the way the Lord will come through for you may not necessarily be the same way he will for the others.

A Man Born Blind
John 9:6-7 (NIV)
Having said these things, he spit on the ground and made mud with the saliva. Then he anointed the man's eyes with the mud and said to him, “Go, wash in the pool of Siloam” (which means Sent). So he went and washed and came back seeing.

The Two Blind Men
Matthew 9:29-30 (NIV)
Then he touched their eyes and said, “According to your faith let it be done to you”; and their sight was restored. Jesus warned them sternly, “See that no one knows about this.”

Others got healed by being laid at His feet
Matthew 15:30-31 (NIV)
Great crowds came to him, bringing the lame, the blind, the crippled, the mute and many others, and laid them at his feet; and he healed them. The people were amazed when they saw the mute speaking, the crippled made well, the lame walking and the blind seeing. And they praised the God of Israel.

Blindness is just one of many examples that can be used. Our point of emphasis is this, you and a circle of friends might be going through the same problem (for example, blindness). You all are candidates for healing, however, the word of the Lord to you as concerns your healing may not be the same for your friends although the end result is that you all will receive your sight. Amen.

So, do not allow comparison or doubt to rob you of the benefits that come with directions from His word. Amen
- September 09, 2018 No comments:
Email ThisBlogThis!Share to TwitterShare to FacebookShare to Pinterest
Newer Posts Older Posts Home
Subscribe to: Posts (Atom)